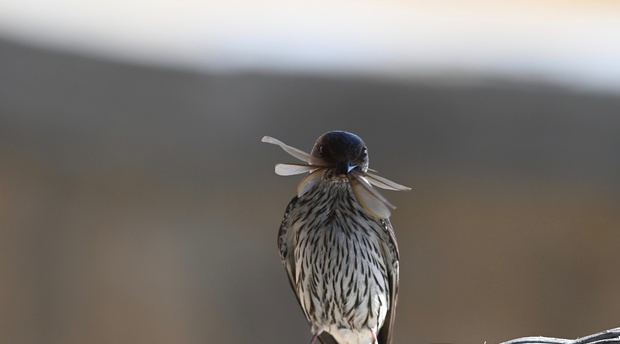 While the world has had to adjust to a new 'normal', the resident wildlife at Sneeuberg Nature Reserve have continued to live an untouched, unspoiled and unscripted life in the heart of the Karoo. 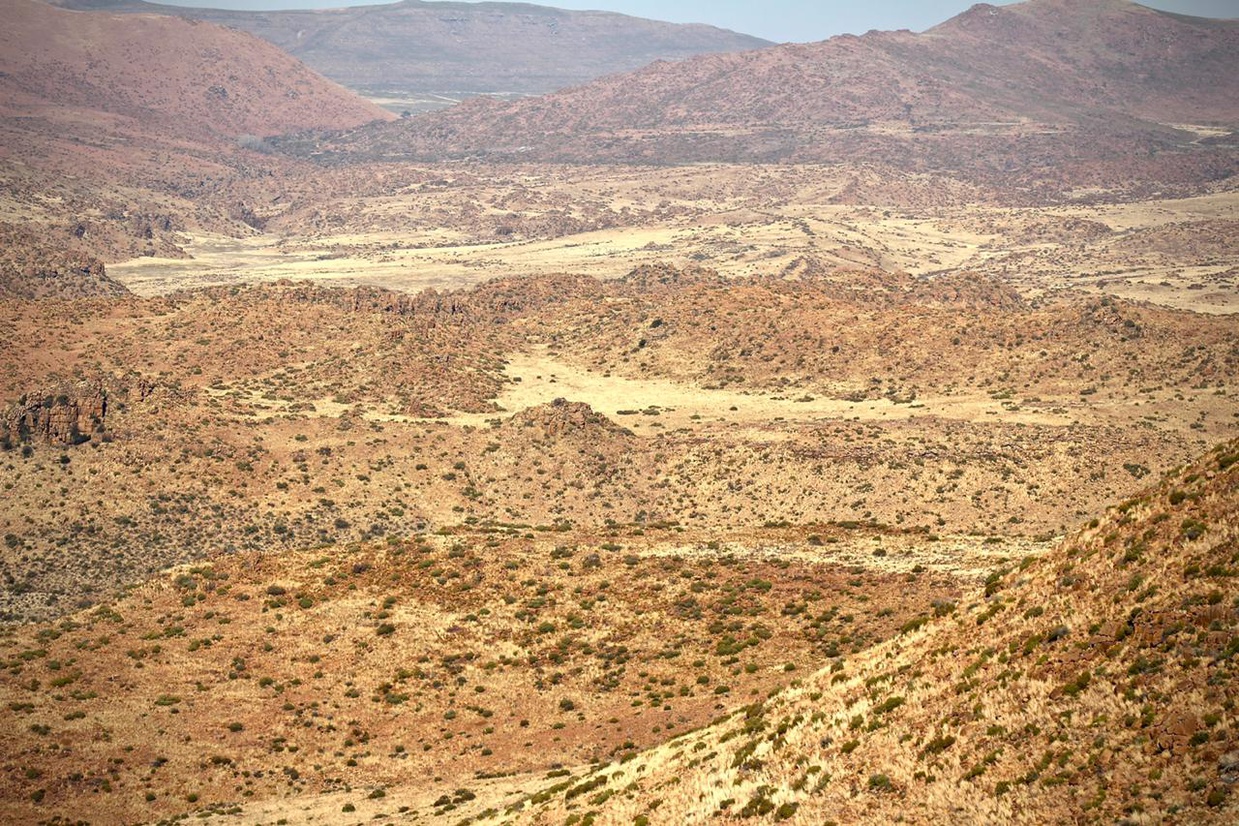 Our resident animals have spent lockdown parading around our cottages, seemingly boasting their freedom and sheer beauty. This has given our estate managers and guests some truly spectacular sights to share and so join us as we reflect on the past three months at Sneeuberg Nature Reserve.

Wildebeest have 'gone viral' over the last few months with the annual Great Migration in Kenya and Tanzania. While we certainly cannot compete with the extraordinary footage from the Serengeti plains, our wildebeest certainly have a far more comfortable life - which still makes for some captivating photos. No crocodiles are lurking in the rivers, and there's no rush to be anywhere other than our reserve, which has everything these prehistoric-looking beasts need in one place. 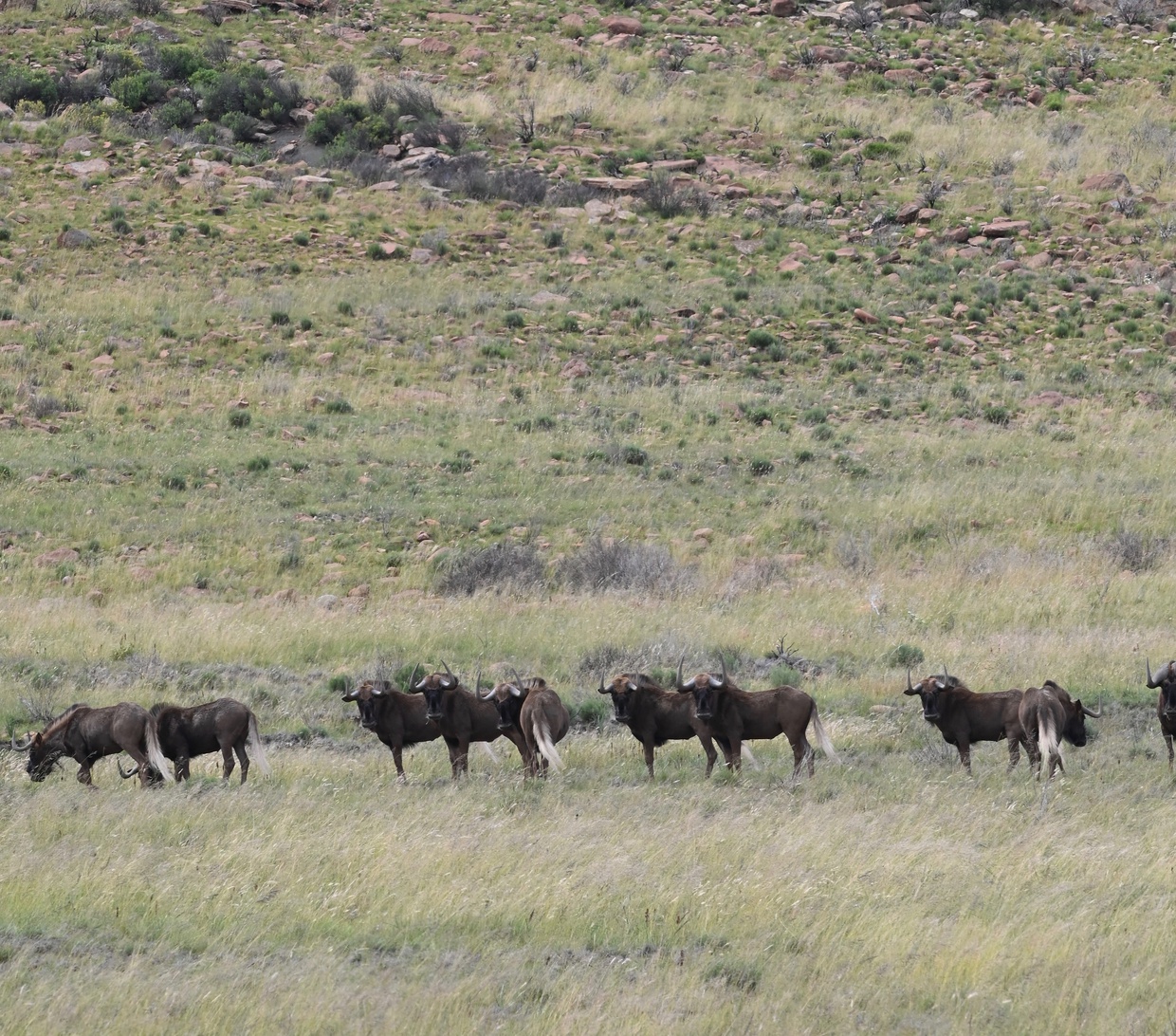 Our resident blesbuck (blesbokke) are partial to the short grass and open plains on offer in the Karoo, and if you're wondering how to identify these buck, here are a few clues. These endemic antelope have a white blaze on their face (known as 'bles' in Dutch) and a horizontal brown stripe above their eyes. They were almost hunted into extinction, but luckily they've been protected and are no longer considered endangered. If you're visiting us over November and December, you may catch the rare sightings of a baby blesbok being born or taking its first few steps. 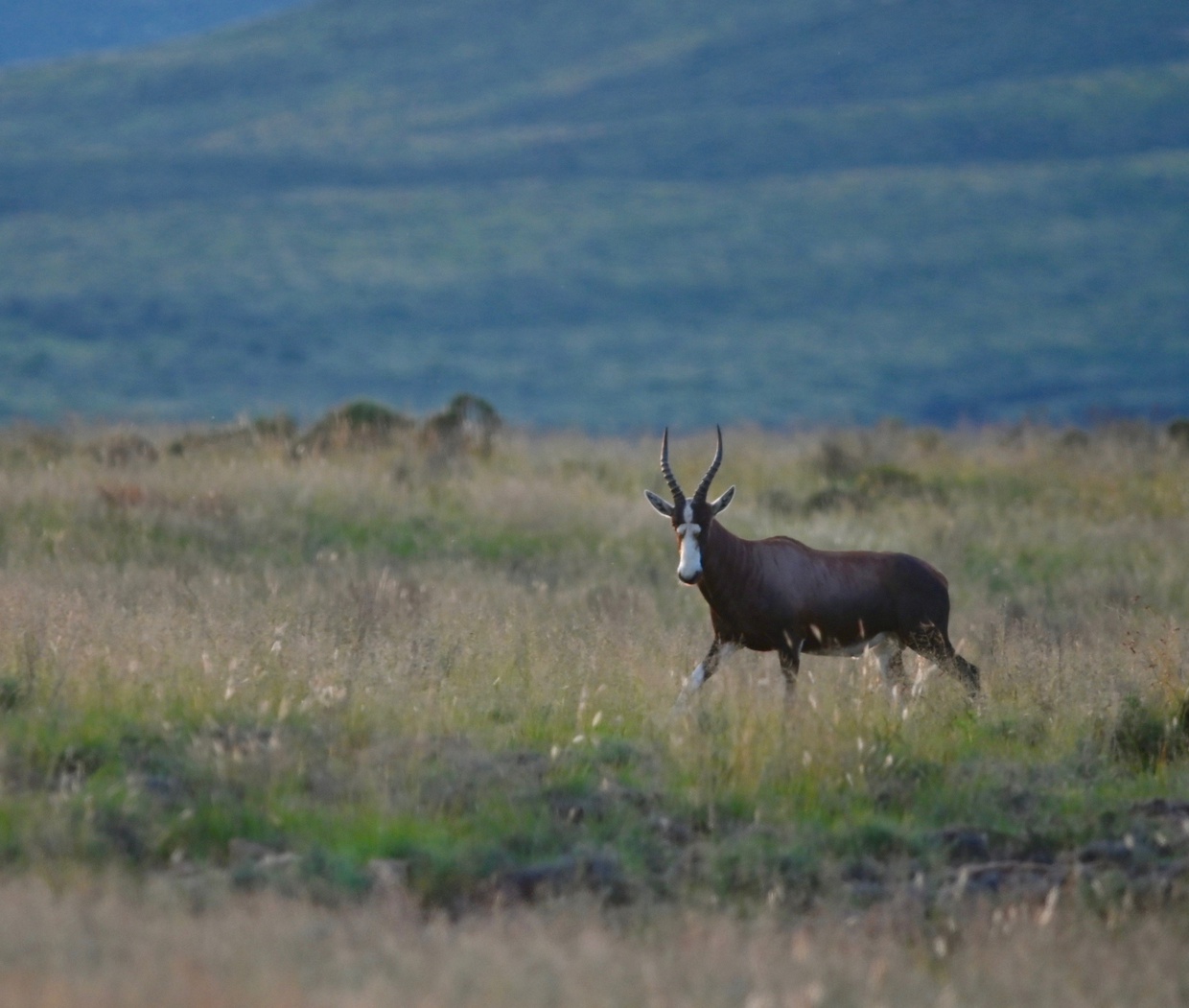 Our resident zebras are perhaps the most curious of all the wildlife at Sneeuberg. They tend to eavesdrop on guests' conversations held on cottage's verandas - and they're certainly not camera-shy. They are often spotted in groups, known as a 'dazzle' of zebras, and they're also apparently black animals with white stripes. However, the jury is still possibly out on this one. 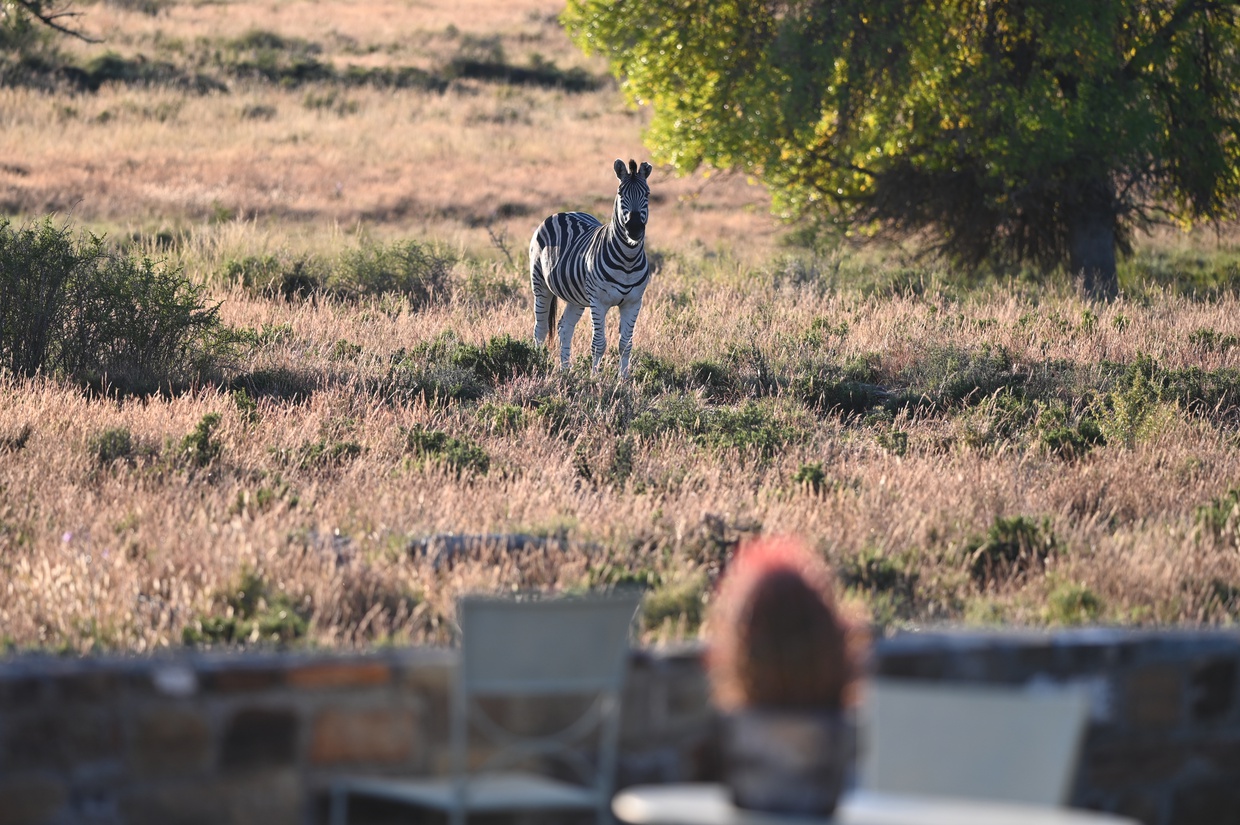 True to their name, duikers are shy and would much rather duck into bushes when there is danger. Therefore, it should come as no surprise that their name comes from the Afrikaans word 'duiker' which means 'to dive.' While we certainly have had plenty of rain, the Karoo often endures droughts - luckily, duikers can live without drinking water. They are also one of a few antelope with a more 'sophisticated' palate, as they eat leaves, fruits and seeds, but can also appreciate carrion and insects. 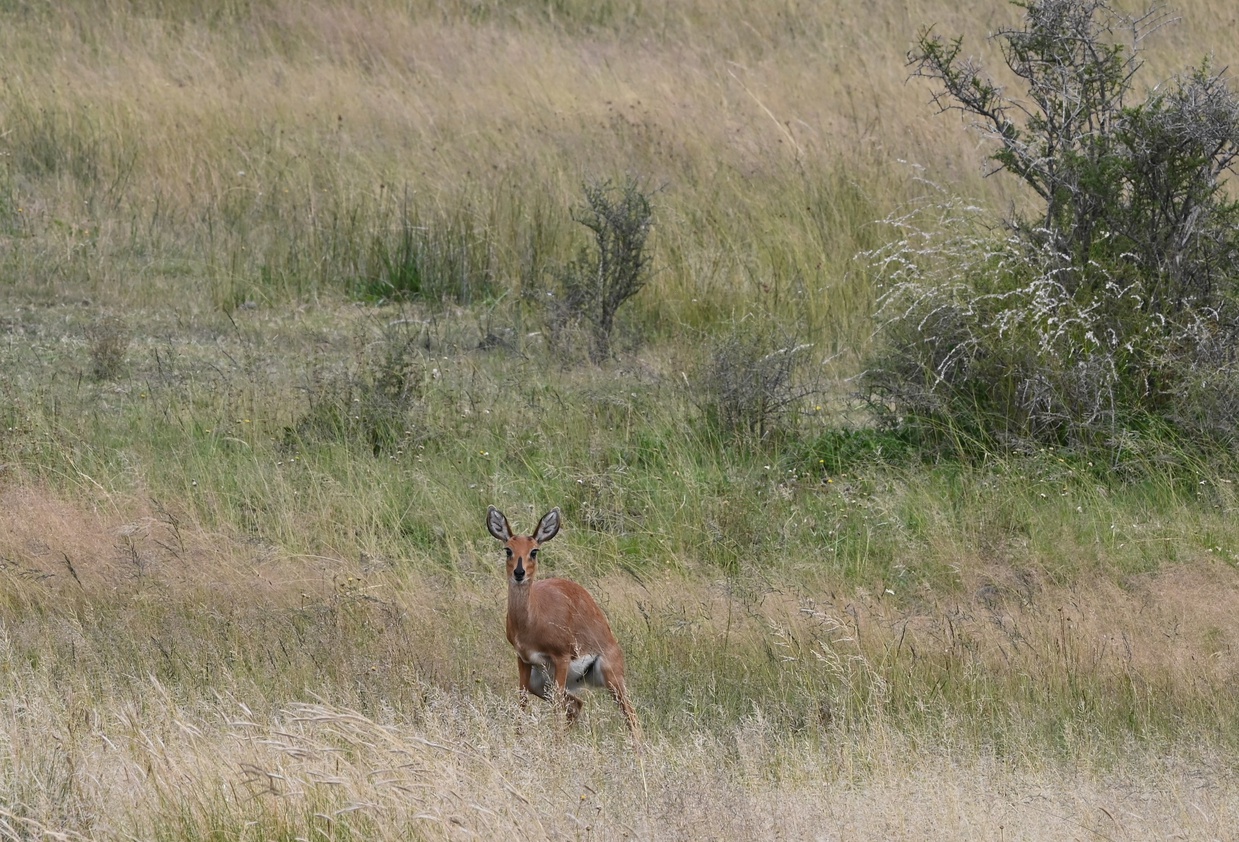 You'd be forgiven for walking straight past this tortoise taking shade along one of our many hiking trails. Yet, while this moment certainly warrants a photo, we ask that you refrain from picking it up or touching it – no matter how strong the urge may be. You may be wondering why we're referring to this tortoise as 'it,' but there's no easy way to tell their gender, as we have to wait until they reach a specific size. Another interesting fact to note is that tortoises use their throats (vomeronasal organ) to smell – a common practice in the reptile world. 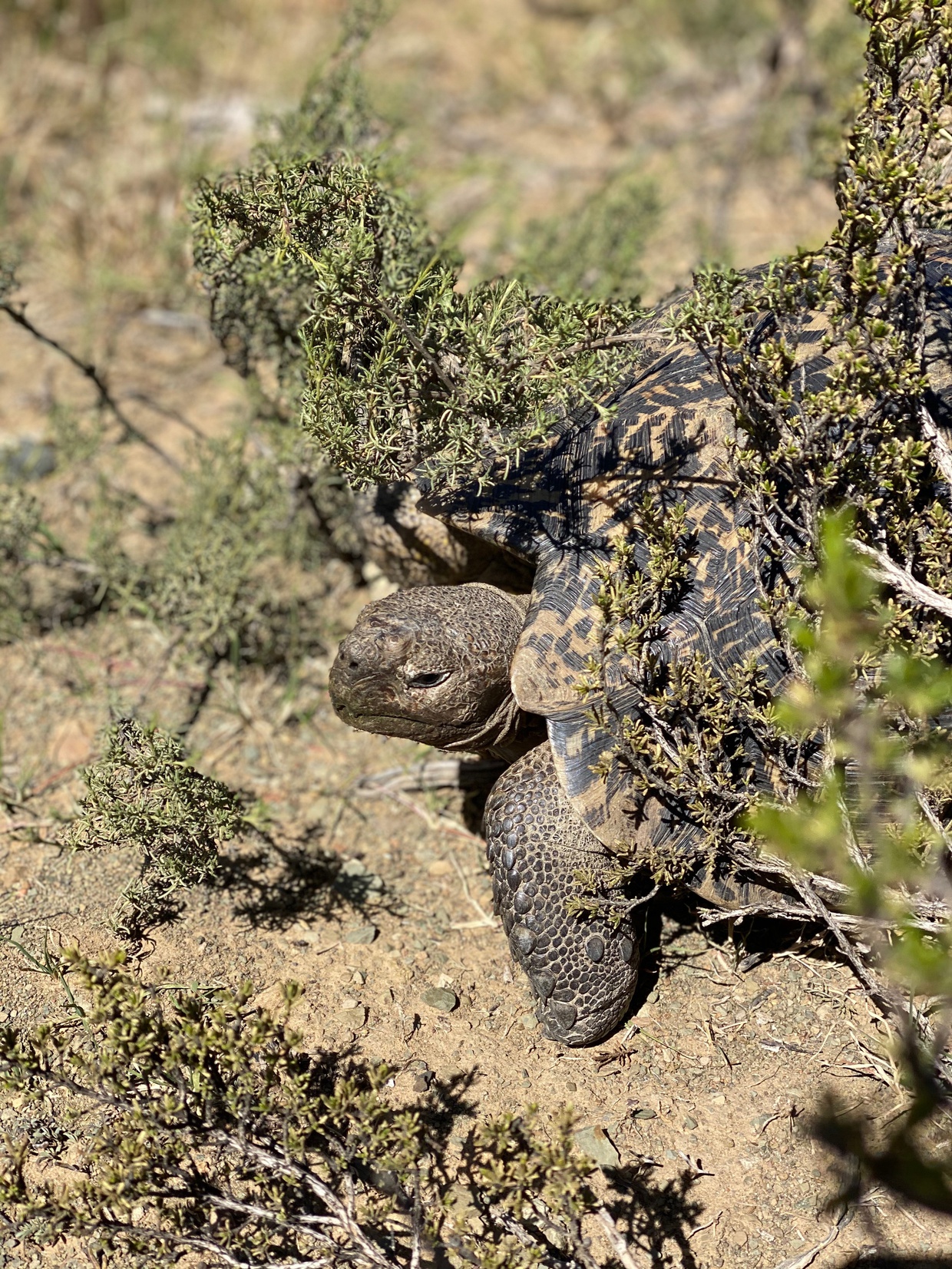 Speaking of reptiles, you may come across the second-longest and heaviest-bodied lizard found on the African continent, the rock monitor lizard. They may look intimidating, but their diet is certainly not. It consists of millipedes, beetles, molluscs, and orthopterans. In some instances, they scavenge the corpses of vertebrae prey or eat a tortoise, but these form very little of their diet and are more 'nice-to-haves' as opposed to meal staples. 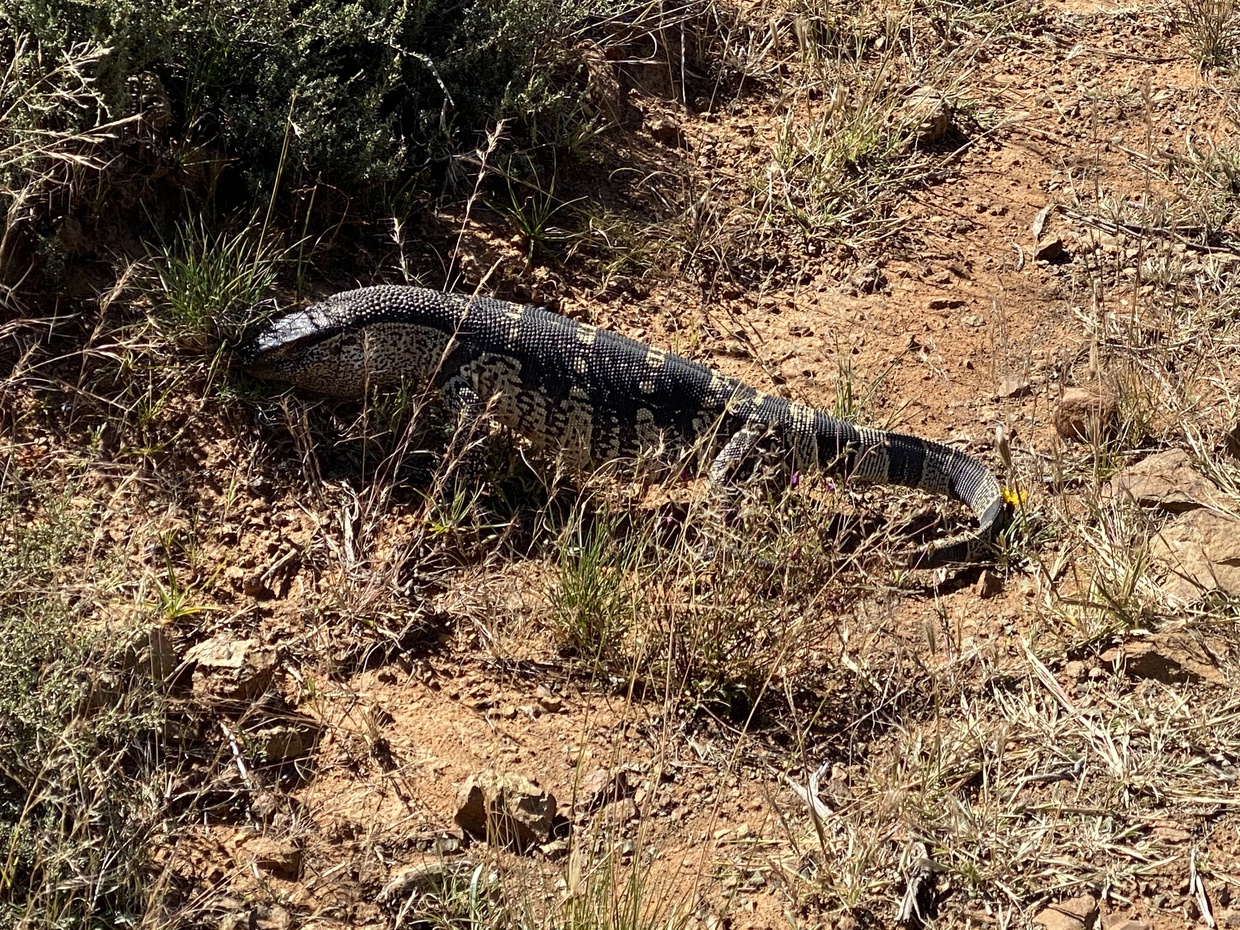 Our estate manager spotted the elusive aardvark during a walk back from Karoo Cottage. The Maier family then visited Sneeuberg a few days later and were also treated to this incredible sighting – even managing to take this video. The aardvark prides itself on secrecy and doesn't give us more than a glimpse into its life - thanks to its speed and nocturnal ways. It also generally spends its days holed up in cool underground burrows dug with its powerful feet and claws. Yet, with the many Winter cold fronts, it perhaps found it warmer on the ground than underneath it. 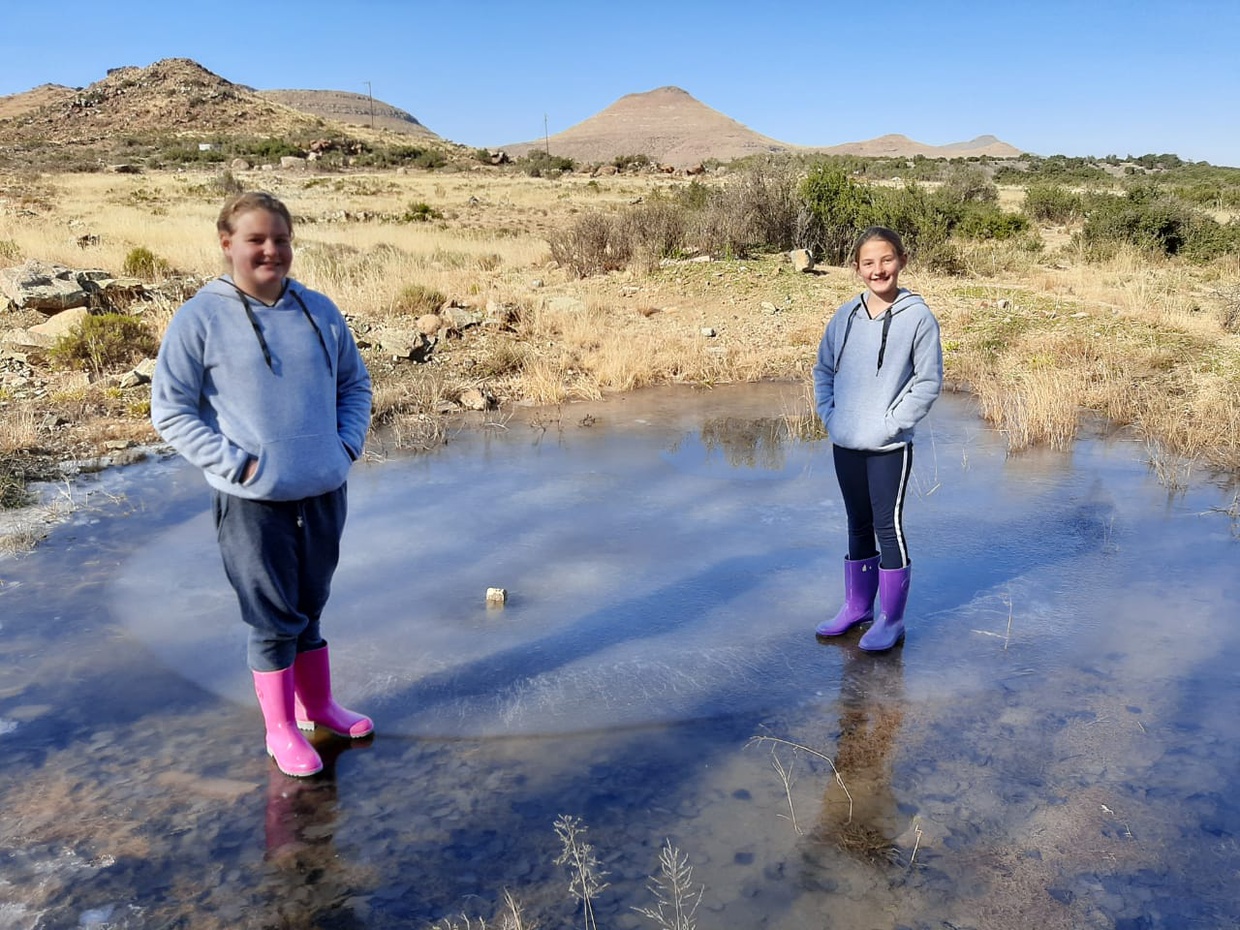 The 2020 winter lasted from May through to September and has been unusually cold. With lockdown, Daron and Richard Slater couldn't send their daughters to school, and Sneeuberg provided the perfect classroom. On one such occasion, the girls learnt about different states of matter at one of the small frozen dams at Sneeuberg. 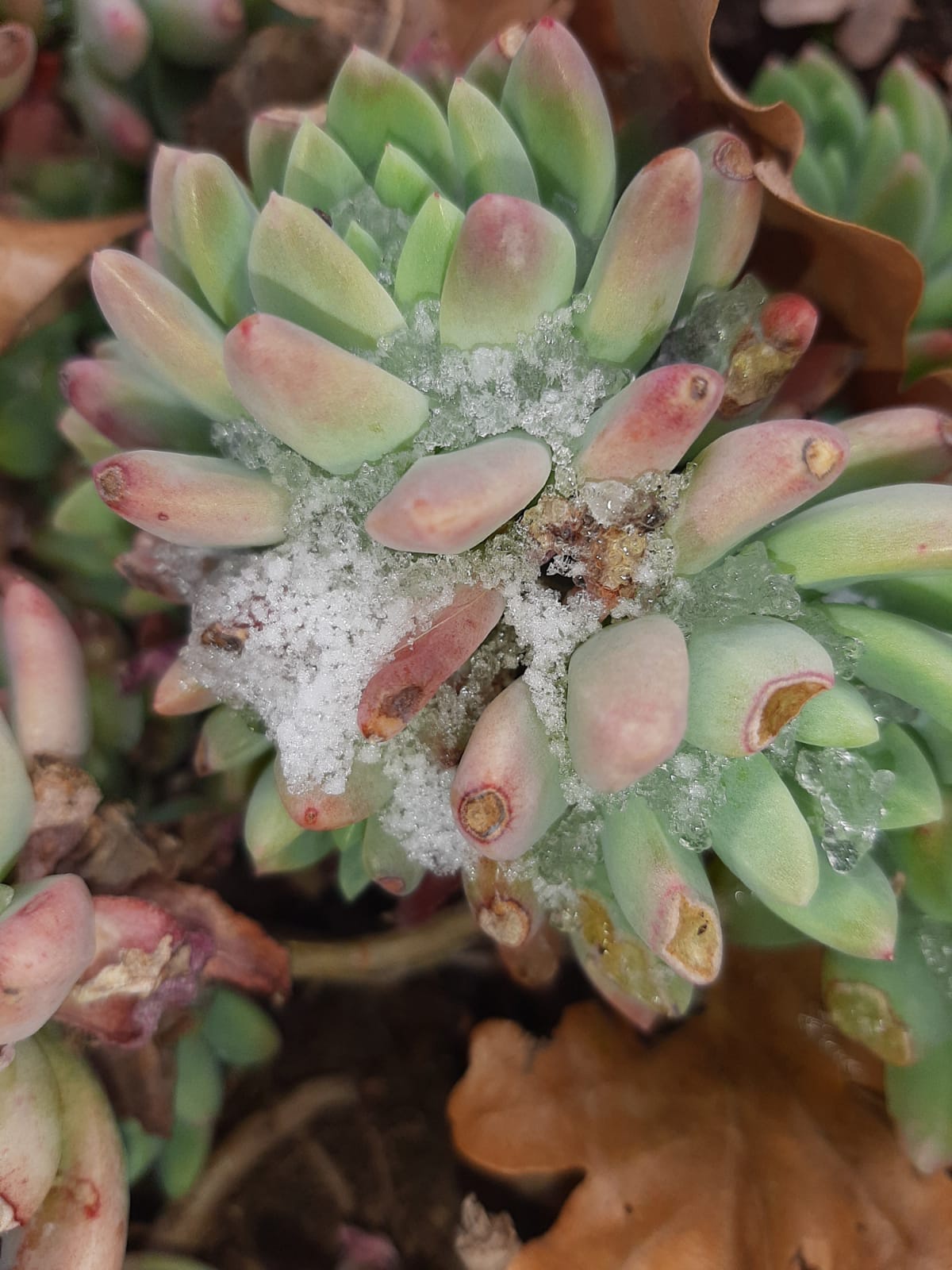 They also went on morning walks and had to identify the various plant and animal species found on the farm. During one of these 'lessons', they found this aloe plant which was another example of changing states of matter after the rain had turned into ice overnight. We're hoping that soon Spring will firmly take hold and put an end to the frosty mornings, and hurry the flowers into bloom, turning our fields of gold into seas of colour. 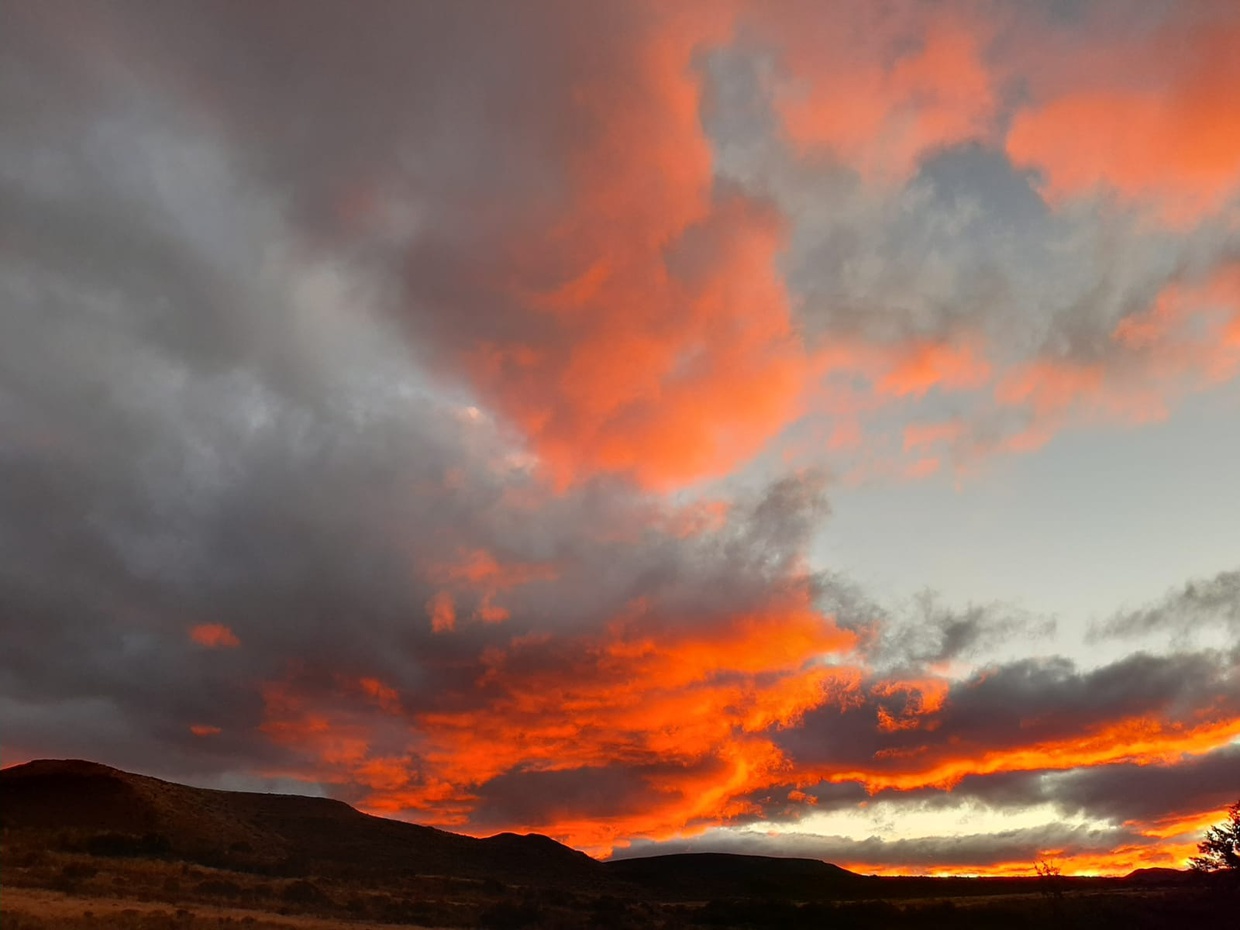 The many cold fronts and crisp winter air created these idyllic sunsets which were captured by Richard Slater and his daughter Jade, with whom he shares a passion for photography. While the Slaters know a thing or two about where to take the best photos of the Karoo sunsets – they aren't the only ones. We recently welcomed the @Safariguys who made creating this blog difficult with their array of incredible images. They captured the essence of what makes Sneeuberg the place to be if you're looking to escape life's daily stressors and immerse yourself in the simplicity of nature. 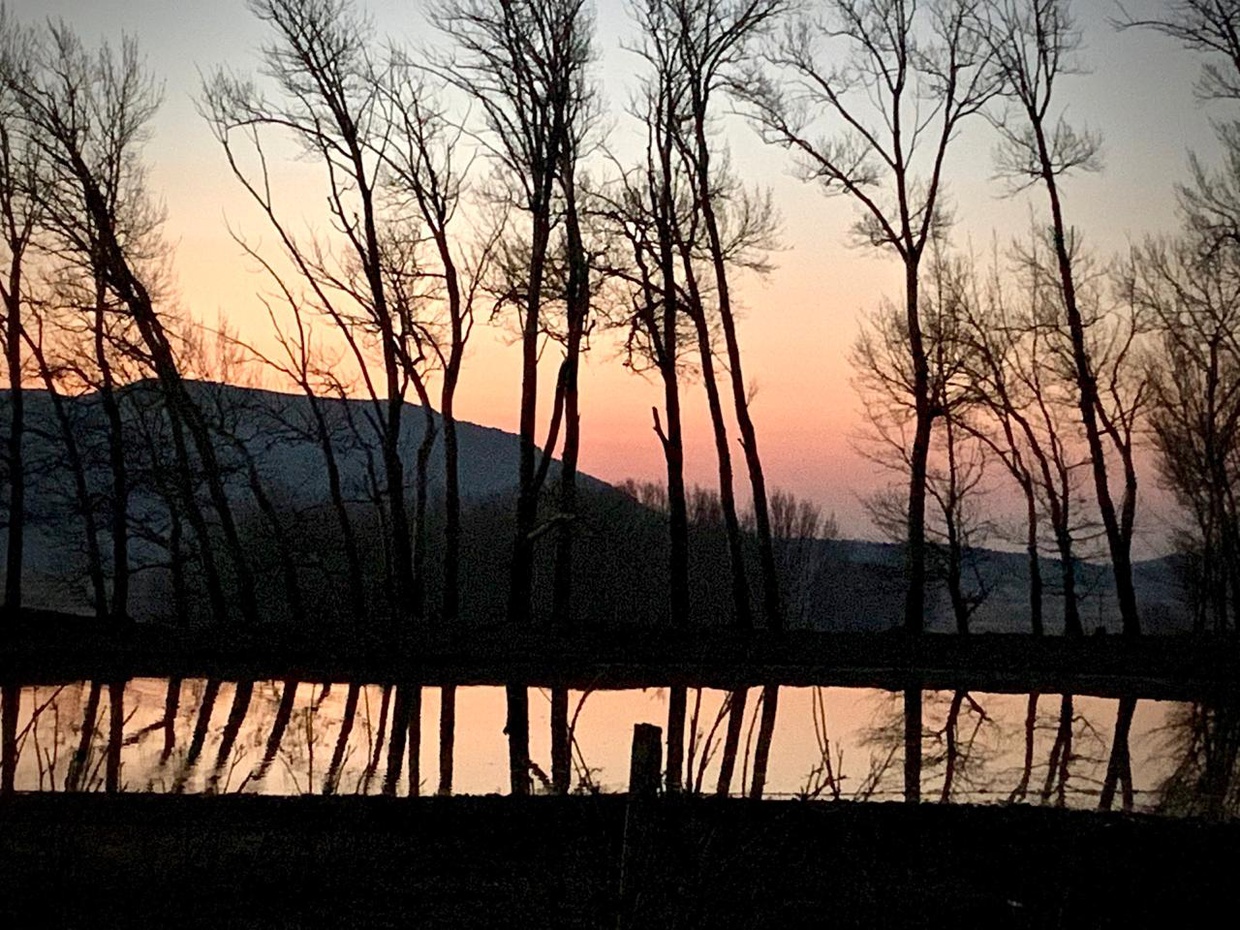